Tom Cruise Hair Loss: How He Stops It - nicehair.org Skip to content 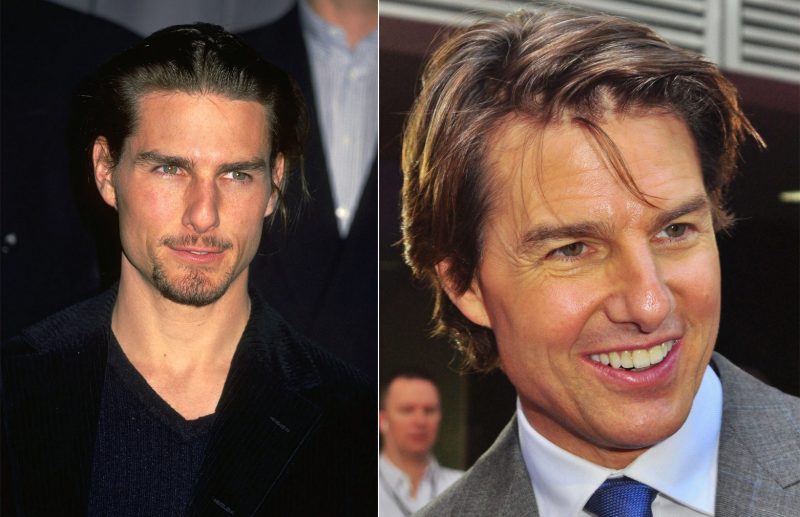 Tom Cruise has a very good hairline and good hair density for a man of his age. According to one report, this is because he has regular hair transplants to maintain his frontal hairline:

It appears Tom’s been getting transplants along his hairline for quite a while. I see clear signs that his hairline has been peppered with hair grafts every couple of years

Via His Hair Clinic

I suspect Tom has used some advanced hair loss treatments for many years to maintain his hair density. Most likely he used a high strength Minoxidil product (10%) and possibly topical anti-androgens and/or androgen receptor blockers. Although, at his age, androgens are less of a problem because testosterone levels drop when men reach their mid-forties. As a result, his DHT levels will be lower, meaning his hair will be less susceptible to androgenic alopecia.

He’s been very lucky to keep his hair at this density for so long. As a man, if your hair is as thick as Tom Cruises at his age it’s likely that you’ll keep most of your hair for the rest of your life now. If you’re going to lose your hair to androgenic alopecia its more likely to happen in your early thirties or even twenties (sometimes even in your teens), when testosterone and cortisol hormone levels are at their highest. Both these hormones decline with age.

DHT and cortisol: the hair dsestroyers

Mr Cruise has fairly dense facial hair (slightly above average for a Caucasian). It’s likely he had moderate to high DHT levels during his younger years. I suspect he didn’t suffer greatly from stress and anxiety in his life. However, my hunch would be that some form of social anxiety or stress led him to join the Church of Scientology. People don’t join Scientology unless they have some form of stress/anxiety-related problems.

Perhaps Tom experienced some kind of horrific experience at some point during his career. He doesn’t strike me as the type to have a breakdown. He seems quite mentally strong. But I suspect there will be some fairly serious underlying insecurity, which is probably very traumatic for him to experience when it surfaces. As a result, he probably uses Scientology to bury that trauma as far down as possible where it won’t resurface and distress him. The mind is an incredible thing.

The mind affects the endocrine system with remarkable sophistication. The evolution of this relationship is mind-boggling. Extremely complex interactions between the perceptions, memories and hormones have a powerful effect on the body at a cellular level. The stress hormone cortisol and the androgen DHT cause an increased release of inflammatory cytokines in the scalp follicles. These cytokines seem to deactivate the Wnt-signalling pathways in the dermal papilla. The exact process by which cortisol and DHT eventually kill the hair follicles varies from person to person. It could be that perifollicular inflammation leads to perifollicular fibrosis, or it could be that increased transforming growth factors are released, which caused the hair follicles to transition from the growth to the resting phase.

What do I think is the cause of Tom Cruise’s hair loss?

I don’t know Tom and I’ve hardly read anything about him before. I don’t read terrible celebrity magazines. And I don’t watch terrible celebrity TV programs. But from the very limited observations I have made of Tom Cruise, it wouldn’t surprise me at all if he had suffered some stress-related inflammatory cytokine aggravated hair loss. This is extremely common. And you’d have to be some kind of superhuman not to suffer from it (like Brad Pitt!). Brad Pitt’s hair truly is one of the great mysteries of male hair.